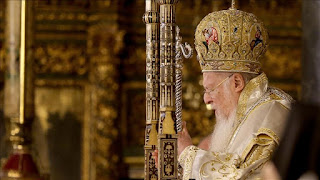 ISTANBUL
The head of the Greek Orthodox Church celebrated Christmas with a traditional ceremony on the banks of Istanbul’s Golden Horn on Friday.
The Orthodox Christmas celebrations began with a service held in Hagia Yorgi Church adjacent to the patriarchate’s residence. Prayers were led by Patriarch Bartholomew I.
Greek Deputy Foreign Minister Ioannis Amanatidis was also present during the four-hour service.
After the church service, clergy and members of the congregation went to Fener dock on the shores of the Golden Horn. A cross was thrown into and then retrieved from the water by a group of swimmers.
Due to a difference in calendars, Jan. 6 marks Christmas Eve for many Orthodox churches and Christmas is celebrated on Jan. 7 rather than Dec. 25.
The majority of Orthodox churches worldwide use the Julian calendar, created under the reign of Julius Caesar in 45 BC, and have not adopted the Gregorian calendar, proposed by Latin Pope Gregory of Rome in 1582. The former calendar runs 13 days behind the latter.
*Reporting by Mucahit Turetken; Writing by Hatice Kesgin
Anadolu Agency website contains only a portion of the news stories offered to subscribers in the AA News Broadcasting System (HAS), and in summarized form. Please contact us for subscription options.