MOSCOW YULE When is Christmas celebrated in Russia and why is the date different for some countries around the world?

Russians get festive in early January, but why?
BY SAM WEBB
5th January 2017, 11:06 am
CHRISTMAS in Russia is celebrated on January 7, nearly two weeks after the UK, US and other historically Christian nations.
So, if you want to wish a Russian friend or co-worker a merry Christmas simply tell them: “S-schah-st-lee-vah-vah rah-zh dee-st-vah!” 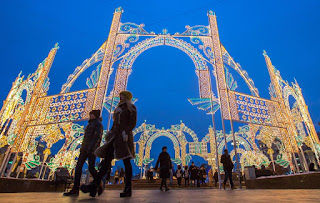 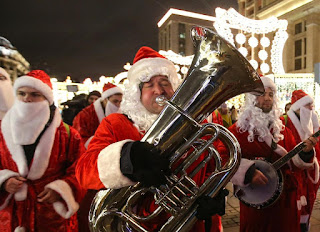 orchestra of Father Frosts perform at the Journey to Christmas winter festival in Manege Square, Moscow

Why is Christmas celebrated on January 7 in Russia?

The date is different because the Russian Orthodox church uses the old ‘Julian’ calendar for religious festivals, although a few Catholics might still celebrate it on the December 25.
Other nations that celebrate the Orthodox date are Georgia, Kazakhstan, Serbia and Ukraine.
The Orthodox Church also celebrates Advent, but it is 40 days long and goes from November 28 to January 6.
The Julian calendar was a reform of the Roman calendar spearheaded by Julius Caesar and was the main calendar in most of Europe until it was largely replaced by the Gregorian calendar, under the direction of Pope Gregory XIII.
The official Christmas and New holidays in Russia last from December 31st to January 10th, according to whychristmas.com 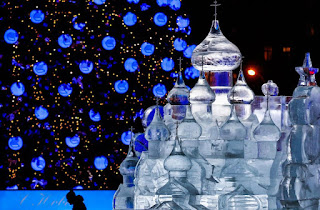 Illuminations for Christmas and New Year and ice sculptures in Moscow. File picture

How do Russians celebrate Christmas?

Under the brutal rule of the anti-religious Soviet Union, Christmas was not celebrated and the state encouraged people to celebrate New Year.
In fact, Christmas was banned in 1929 and so were Christmas Trees until 1935 – when they turned into ‘New Year’ Trees.
Russians were free to celebrate once again after the collapse of the Soviet Union in 1991, but it’s still overshadowed by big New Year celebrations, which are more like our Christmas celebrations. For example, Ded Moroz (‘Grandfather Frost’) and his granddaughter Snegurochka brings presents to children at New Year.
But Christmas still has its traditions. On Christmas Eve many Russians don’t eat meat and instead enjoy borscht (beetroot soup), vegetable pies, porridge and salad. A sweet drink made of dried fruit and honey called ‘vzvar’ is often drunk at the end of the meal.
A roast is usually served on Christmas Day and is usually accompanied by meat dumplings and afterwards children in some regions go carol singing around the homes of friends and family.


Is Christmas celebrated on another date anywhere else?

Coptic Christians in Egypt, Ethiopia and Eritrea use the Coptic calendar, also called the Alexandrian calendar. This calendar is based on the ancient Egyptian calendar and similar to the Julian Calendar used by the Orthodox Church. They celebrate Christmas on January 7.