Ethiopians unite to celebrate Christmas at iconic town of Lalibela 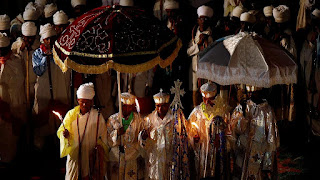 Christians in Ethiopia are celebrating Christmas today. The birth of Jesus is a big deal in the Horn of Africa nation which is steep in religious history dating centuries back.
The celebration is referred to as Gena. Around this time all Christians unite to celebrate the birth of Jesus Christ.
At Lalibela town for instance, the state-affiliated Fana Broadcasting Corporate (FBC) reports that many of the faithful will gather around the rock-hewn churches amid the flood of foreign tourists who visit the country at this time.

Gena or Ledet (7 January), the Ethiopian equivalent to Christmas, is preceded by an all-night vigil following 43 days of fasting that culminate.

Lalibela is a town in northern Ethiopia famous for monolithic rock-cut churches. It is one of Ethiopia’s holiest cities, second only to Aksum, and a center of pilgrimage.
Ethiopia’s tourist website wrote about Christmas, ‘‘Gena or Ledet (7 January), the Ethiopian equivalent to Christmas, is preceded by an all-night vigil following 43 days of fasting that culminate.
‘‘It is a family-oriented holiday, but in some areas it is marked by traditional dancing or a hockey-like game called Yegenna Chewata, supposedly played by the local shepherds on the night Jesus was born. It is traditional to eat the national dish doro wot (chicken stew) over Gena.’‘
Many Orthodox Christians celebrate Christmas on January 7. Among others, those in Russia, Ukraine, Serbia, neighbouring Egypt, Belarus, Georgia, Kazakhstan, Macedonia and Maldova.
Coptic Christians celebrate the birth of Jesus Christ on january 7 according to the Julian calendar that pre-dates the commonly observed Gregorian calendar.
የተቀመጠው ሔኖክ ያሬድ ላይ 8:01 AM