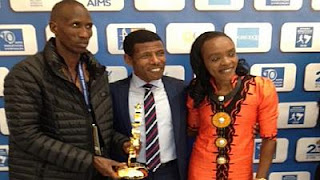 Haile Gebrselassie, Ethiopia’s athletics great, has been given the Lifetime Achievement Award from the Association of International Marathons and Distance Races (AIMS).
Haile – who is the new President of the Athletics Federation – received his award at an event organized on Friday in the Greek capital, Athens.
“What an honor to receive the AIMS Lifetime Achievement Award in Athens tonight, thank you!” Haile tweeted after the award.

We are honoured to be able to recognise the achievements of Haile Gebrselassie and his unrivaled contribution to the Marathon Movement and world sport.

What an honor to receive the AIMS Lifetime Achievement Award in Athens tonight, thank you! pic.twitter.com/fSZcH3u29O
— Haile Gebrselassie (@HaileGebr) November 11, 2016

AIMS President Paco Borao is quoted to have said “We are honoured to be able to recognise the achievements of Haile Gebrselassie and his unrivaled contribution to the Marathon Movement and world sport. Haile’s success has been an inspiration to so many throughout Africa and around the world and his dedication is an example we can all follow.”
AIMS has previously presented Haile with the AIMS World Athlete of the Year Award for three consecutive years between 2006 and 2008.
Gebrselassie, has brought the country a lot of glory in long-distance events had a stellar career which spanned over two decades, since 1992 when he won the 5000m and 10,000m titles at the World Junior Championships.
Over the duration of his active days, he set 27 world records and 61 Ethiopian records, as well as win two Olympic gold medals and eight world titles both indoors and out.
In addition to his athletics career, Haile is also a businessman and employs more than 2000 people in several businesses back home. Local media reports that he is involved in real estate projects, owns four hotels, a coffee plantation and is the distributor for Hyundai in Ethiopia.
He is also a goodwill ambassador for the United Nations and is involved in tree planting and road projects. He has built several schools in his residential area.
http://www.africanews.com/2016/11/12/ethiopian-athletics-great-gebrselassie-receives-lifetime-achievement-award/